A Stanford dropout founder. "AI" technology. Recruits fresh out of MIT and Harvard. Skyrocketing valuations, huge paychecks, and a lightning-fast culture. All the makings of a legendary tech startup story. Was this Yahoo? Nope. Snapchat? Try again.

This was Trilogy Software in the 90s.

Although their glory has long since faded, their impact remains. Here's an incomplete list of Trilogy mafia members:

Crunchbase has a list of Trilogy mafia founded companies here. There are 87 entries.

All in all, they are one of tech's most successful, albeit relatively unknown, "mafias". Their story is a fascinating dive into the dot-com boom tech scene, and holds lessons on recruitment and culture that founders will still find relevant today. How do tech mafias form?

"Trilogy Development Group" was founded in 1989 by Joe Liemandt, a Stanford CS student who dropped out to start the company. He brought along 5 classmates to join him in Austin, Texas, where the cost of living was cheap and the taxes were lower.

From these humble beginnings, Trilogy became a 90s pioneer of enterprise software. Their main product was "config-price-quote" software, which allowed sales forces to accurately quote and configure complex solutions such as mainframes, central office switches, airplanes, and automobiles. In fact, their software could even identify and recommend the ideal combination of products and services for each customer. At the time, this was a game-changer for their clients.

They also built sales compensation software, which allowed sales leaders and HR teams to move sales commissions from spreadsheets to a software database and workflow engine. Their main clients were Fortune 500 companies, especially in the auto and airline sectors.

Although not the "coolest" product, Trilogy was wildly successful. By the mid 1990s they had grown to $250M in revenue, were valued at well over a billion dollars, and Joe Liemandt became the youngest self-made man to enter the Forbes 400. In 1996 he graced the cover of the magazine, with a net worth of $500 million. 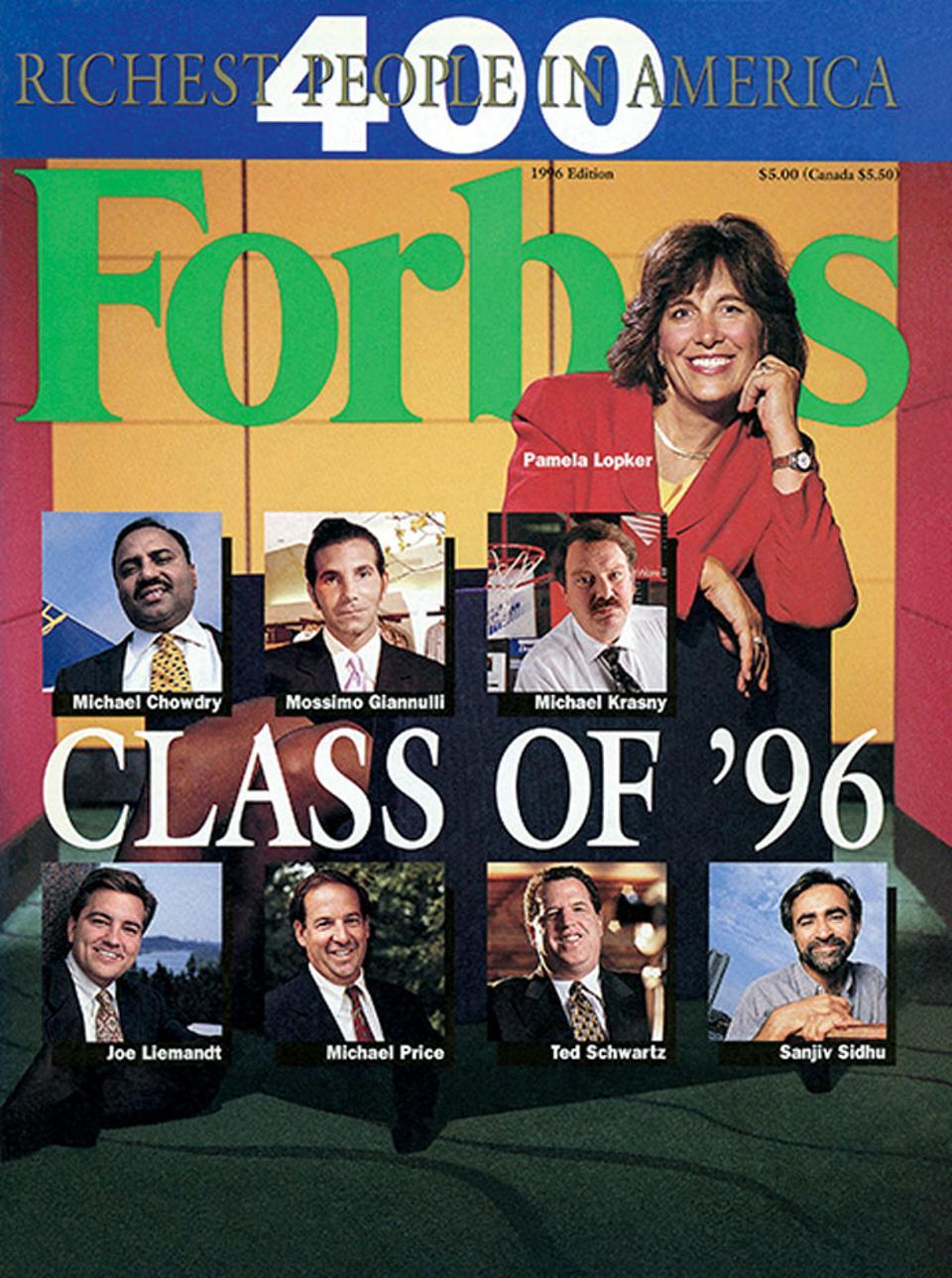 During this late 90's golden age they became famous for lavish parties, furious recruiting at college campuses, and massive onboardings — at one point they onboarded 250 people at once, a 50% increase in their headcount. They even spun off a publicly traded subsidiary, an early B2B marketplace for computer parts called PCOrder.com. It was the best of times for Trilogy... until the dot-com crash. PCOrder.com's stock price fell to near 0, Trilogy's valuation fell as well, and the company never regained the same stature. By 2001, Liedmandt had fallen off the Forbes 400, and many employees left or were let go, though the company never fully shut down.

At the time, it was a heavy loss for the burgeoning Austin tech scene.

Trilogy University: Birthplace of the Mafia

During their golden age, Trilogy was a recruitment machine, more than tripling their headcount in under three years. Liemandt wanted top talent, but they were competing for an extremely limited pool of computer science graduates, and couldn't pay as much as the "safe", established tech players of the 90s. So, they developed a pitch that distinguished them from the competition:

"Rather than paying you lots of money and stock options to pound out code for eight hours a day, we'll give you a ton of responsibility right away. You can lead projects, build new products, and even start a company. Have at it! Oh yeah, and we'll spend an average of $10,000 per recruit flying you out to Austin where you can play roulette with the CEO before you decide."

This was key. Trilogy was selecting for big risk-takers with an entrepreneur's mindset at the top of their recruitment funnel.

Once these recruits (all fresh out of college) got to Austin, they were enrolled at Trilogy University. This corporate bootcamp, modeled after Marine Corps training, was possibly Trilogy's greatest innovation, and participants cite its influence as having a huge impact on their careers. It lasted 12 weeks, and during that time employees would be split into 80 different teams working in intense R&D projects for Trilogy, some of which became separate companies under the Trilogy umbrella. Classes started at 8am and went to midnight. You would spend almost all your waking hours with your team, and the bonds formed here ran deep.

One participant, Vince Mallet, recalls: “on the second day, we were all asked to tell the most significant emotional experience of our lives.” The first month focused on this emotional bonding, and instilling the values of Trilogy: humility, teamwork, customer-obsession, and, most of all, risk-taking. Employees say the bonds formed just during this first month persisted through their time at Trilogy and beyond, even as they eventually split off into different teams or left the company.

In month two, recruits "have to come up with a frame-breaking great new business idea." They have to come up with an idea, create a business model for it, build the product, and develop the marketing plan. It's wasn't hypothetical either. Liemandt hand-picked the best products to launch. By month three- graduation month, most employees are picked by or matched with different teams at Trilogy and graduate from the university. Some continue to work on their project, if it was in the lucky 15% selected to go on.

Trilogy University lived the work hard, play hard culture. The rigorous program was tempered by luxurious amenities like company cab cards to travel anywhere in Austin for free, sponsored trips to the beach and Las Vegas, more snacks than a convenience store, and free kegs of beer every Friday. It was 90s dot-com boom excess from start to finish.

In this environment, it's easy to see how risk-taking fresh graduates could be transformed into creative, effective entrepreneurs with incredible bonds to their fellow Trilogy University alums — all the makings for a future tech mafia. As Trilogy declined in the early 2000s, many of these employees left to start ventures that seeded the early Austin tech scene.

"Liemandt knows most of the kids he's hiring are too smart to work for him — or anyone else — for long. "There are a lot of people here to learn how to start a software company," he says. "That's great." He says he'd rather get a few years of boundless entrepreneurial energy from his employees than get many years of mediocre performance."

This except from a Forbes article proclaiming Liemandt as "computerdom's newest magnate" foreshadows the massive impact that the team he put together at Trilogy would have. For example, Trilogy's eventual decline was Austin's gain. Trilogy introduced over a thousand entrepreneurial, creative, and techhnically skilled people to Texas, like Joshua Baer, founder of Austin technology incubator Capital Factory and Heather Brunner, CEO of WP Engine.

Their influence extends beyond Austin. For example, Bryon Krug appears as an eager college senior at Carnegie-Mellon and a potential Trilogy recruit in this Rolling Stone piece from 1998, titled "Wooing the Geeks". He ended up joining Trilogy, then went on to found his own publishing company, and co-founded CEG Solutions in 2008, a major energy efficiency company where he still serves as president.

As for Trilogy's founder, Joe Liemandt? He's back on the Forbes 400, with a net worth of over $3.5 billion, thanks to his private equity investments in software companies.

There are some parallels between the Trilogy mafia and their more famous counterpart, the Paypal mafia.

Could this be the formula to build a new tech mafia?

Tech mafias are rare, and it's not obvious one has formed until years later. The first article on the success of PayPal's former employees was from 2007, 5 years after their acquisition. Spotting one is harder than finding a unicorn. In this case, you're looking for a whole herd.

In terms of tech mafias operating today, Uber and Airbnb have been selected as likely candidates. Andrew Chen, who led Rider Growth at Uber and now is a partner at a16z, estimates that two dozen venture-backed startups have come out of Uber so far. Clearly, their alumni are already adding an extra jolt of entrepreneurial energy to the Valley, but what about outside California? Could some city be flying under the radar, in the way Austin was before Trilogy? Epic Games, for example, has brought top talent to Raleigh-Durham, North Carolina to work on some of the biggest video games out right now, like Fortnite.

Wherever the next big tech mafia forms, it's sure to leave a massive impact, like Trilogy did. And although Trilogy University closed, it's legacy lives on in the hundreds of entrepreneurs and dozens of companies their alumni eventually spun out. While Trilogy itself wasn't a traditional success, they have a lot to take pride in.